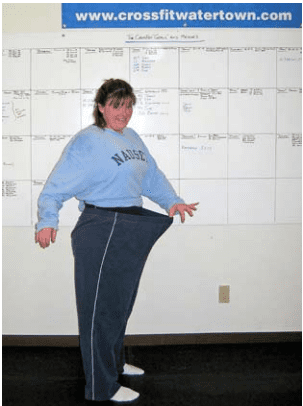 Our gal Sue finished a triathlon today. I say “our” because she’s one of us, a CrossFitter.

You might not think a sprint triathlon is that big of a deal, but unless you’ve ever done one, you have no idea how hard it is. For competitors, it’s a big milestone. For Sue, it’s even bigger.

But Sue doesn’t want you to know that – in fact, she doesn’t want me to write this blogpost. She doesn’t want the attention, the spotlight, the focus. She wants to be just another CrossFitter. But you need to hear her story. 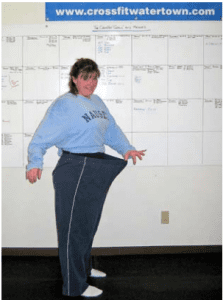 Sue came to me just over two years ago, when she was considerably larger and could barely walk a block, let alone run 3.1 miles, and bike 12 miles, and swim a half-mile, in the same stretch of time. (You can read her CrossFit story in the CrossFit Journal.) Now, 100 lbs lighter and seemingly 100 years younger, Sue finished her triathlon today. You have no idea of the pride in my heart right now.

But what Sue did was important not just for her, but it was an important lesson for all of us in CrossFit. Allow me to explain.

CrossFit is a big tent. A very big tent. There’s room for all sorts of folks and routines and attitudes in CrossFit – and we love it that way. We’ve got Olympic athletes and military members and grandmas and kids and soccer moms. We’ve got elite athletes and those who are becoming athletes for the first time in their lives. We’ve got room in the tent for all of them.

What we shouldn’t have room for, however, is the attitude that sometimes creeps in: The attitude that says that only some of us matter, that CrossFit is really only about (and for) firebreathers. You know what I’m talking about — the idea that only elite performance matters. It’s not a pretty sight, but I’ve seen it in some trainers and some affiliate owners and some athletes. You might have seen it too. It’s in the guy who leaves his chubby partner on the run during a “Team” WOD because he wants to return first and impress somebody else. It’s in the trainer who yells at his client because the woman is scared and she wants spotters on her back squat. And it’s in the affiliate owner who says that you’re not really a CrossFit trainer unless you make your athletes puke and bleed.

Sue finished a triathlon today. In two years of CrossFit, she’s never puked and I think she might have bled only once from a ripped callus. (Good hand care maintenance.) But she’s cried, cursed like a sailor, laughed, and maintained a stiff upper lip. And her performance was elite today because, on a sleepy Sunday morning in the autumn-tinged Connecticut countryside, it was the best feat, and it was hard-won, and it was sweet.

Like I said, the CrossFit tent is big and we have room for many types and kinds. I love ’em all. But my corner of the tent – the corner with Sue and my 43-year-old aging body and the “emotionally-disturbed” kids and the older folks and all the other non-traditional athletes – that’s the corner I like the best. We’re not coming in first, or winning any medals, but we’re changing the world one life at a time.

So the next time you feel the urge to beat your chest and look down your nose at the big girl, or the old guy, or the poor mover in the back with the terrible squat, remember Sue and her triathlon. [Tweet “The hearts of champions are sometimes housed in unexpected bodies.”] Take off your athletic blinders and recognize effort when you see it. You’ll be a better person for having a bigger heart – and a better CrossFitter for it too. True CrossFitters can see elite perfomance, wherever it may be.