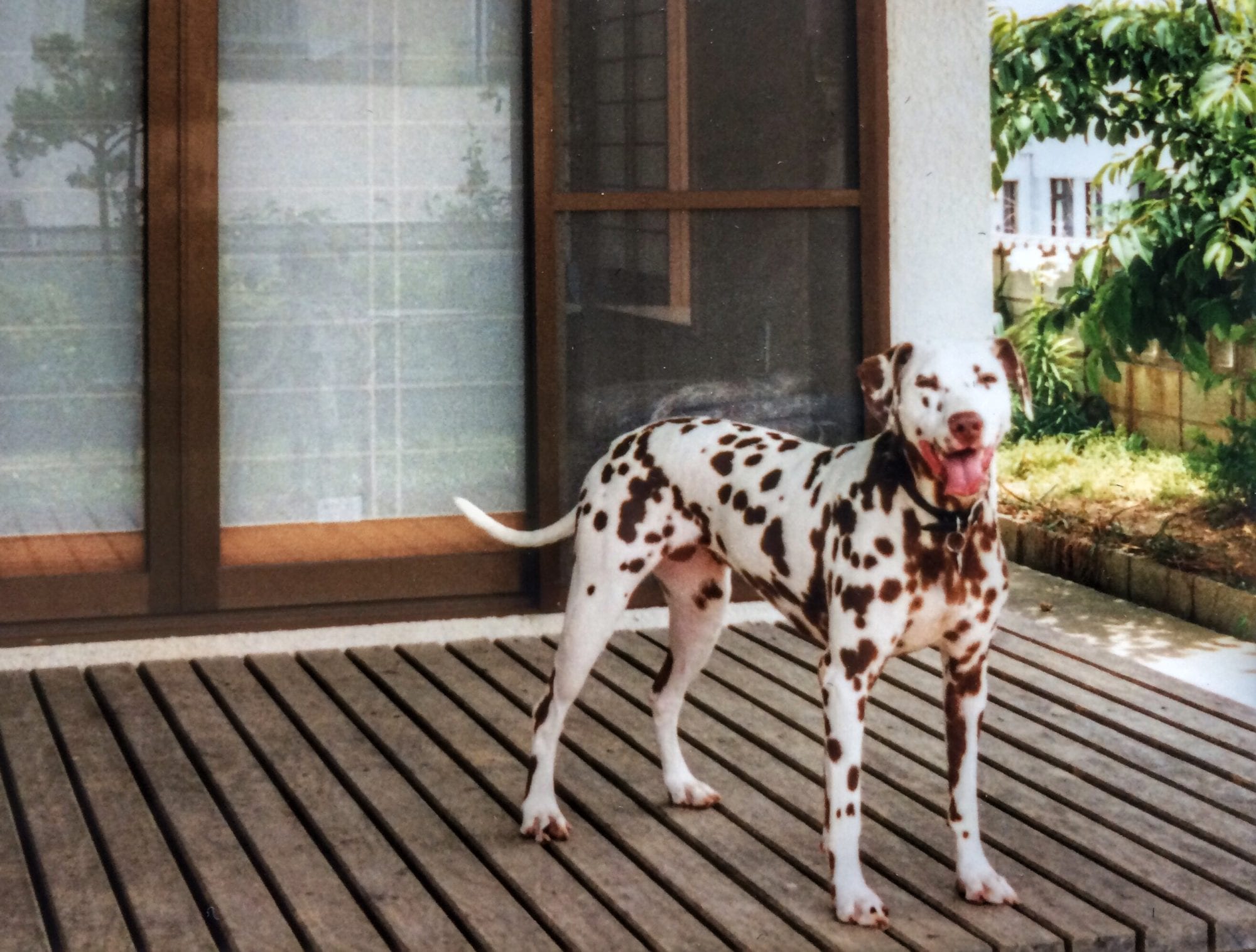 Recently, I was talking with a friend who had to help his dog leave this life. That’s a hard thing to do, for any pet-lover who has to do it. But one of the most important and responsible things we can do for our pets is to love them all the way home.

Some dogs seem to know when their time is ending,  but they can’t tell us with much more than a look.

We have to figure out what is right, what is fair, what is full of the most love for them.

In this way, being a pet owner is so hard. How do you decide when a sentient being should cease to breathe? How can we have this responsibility? It seems too great, especially for those who cannot speak to us except in looks and whimpers and sighs, expressing sadness without words. Pet ownership forces us to be more intuitive as humans: it opens new channels of communication, and it opens our hearts. 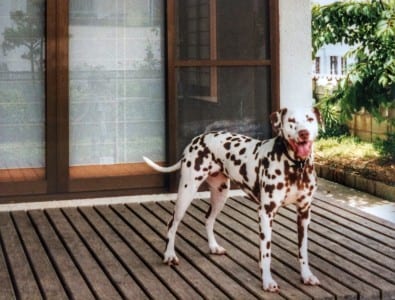 Gertie on our porch in Okinawa, Japan

When my dog Gertie died suddenly over ten years ago, I was adrift, even though I had no decision to make on her life and I still had two small children and a husband. But without that liver-spotted Dalmatian who used her paw like a hand to flip her water bowl and scoop things from under the couch, my  little house full of noise was simply too quiet.

There was no pad of paws, no scramble of her body behind the front door when I put the key in. Gertie always slept on the other side of the door, waiting for me to come back. She had moved with us from Northern California to Japan to Virginia and back to (southern) California.

She was the constant in my life when everything felt inconsistent.

She knew every secret I had, and never told a one. When I cried, she came and sat next to me and leaned into me, like just her body being there could make a difference … and somehow it did. And now she wasn’t there and the house was empty. Everything was empty. I wondered if life would ever feel full again.

Back in those days, we lived in the middle of nowhere—an isolated Air Force base in the Mojave Desert. I would ride my bike deep into the Mojave, peddling into a desolation few visit or try to understand. But it was where I could find myself, there among nothingness, in the the void, absent of everything else humming in my life. And it was there that I would crest this one hill and at the top, yell my dog’s name like that of some long lost warrior.

No one to hear me. No one to see my pain. No one to wipe my tears. Just me and my sorrow on that bleak, unforgiving tableau.

Then I would peddle down that hill with a fresh ferociousness, wanting to lose myself in that speed that thrill that danger that loss that anything. My sorrow somehow riding on that bike with me, barreling through the sand and rock and dust and tumbleweeds. Some days, I’d take a left at the trailhead and ride past the pet cemetery on base where we had buried Gertie, out among nothing in the desert, the high chain link fence trying valiantly to keep back the coyotes and the vultures and the hawks and all the other animals of prey that lived out there in the nothing. We had buried Gertie deep in the hard sand, on top of her favorite dog bed, and I had read some words before we each tossed in a favorite toy of hers and some biscuits. 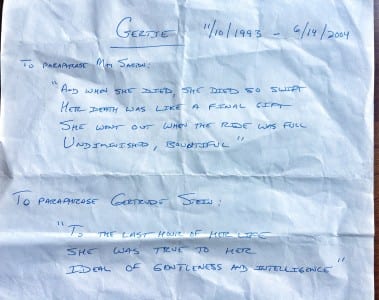 I recently found the notes from her service

Then we had filled the hole and covered it with mounds of hard-found rocks gathered from all over base, so the animals couldn’t dig her up. I don’t know if we succeeded, but I certainly hope we did.

I’d cycle past her grave on my bike rides and I’d yell, “I love you!” … to no one there, just the memory of a dog with a heart seemingly bigger than those of so many humans. And then I’d pedal home to my noisy quiet house.

We got a puppy a few months later. She was sweet and friendly, but never the same as Gertie—never as smart, never as close, never as funny, and I suppose it was unfair of me to think she could be.

Some dogs in your life are so special, and they can’t be replaced. People are that way too.

I don’t know why it took me most of my life to realize this.

I’ve  been lucky enough to have a few dogs, and I love my current companion Jasper, but one dog will always stand out in my memory, I suppose. Time to jump on my mountain bike again, and crest a hill and yell her name. She won’t come running, but I am lucky because her memory always will. 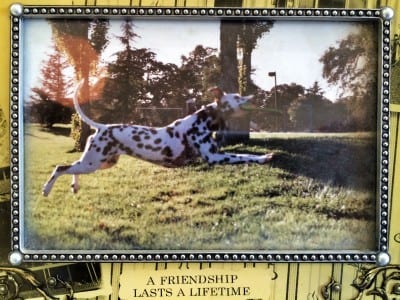 Catching a frisbee. Oh, could she fly.

« Get the Mean Out! One-Clickers »