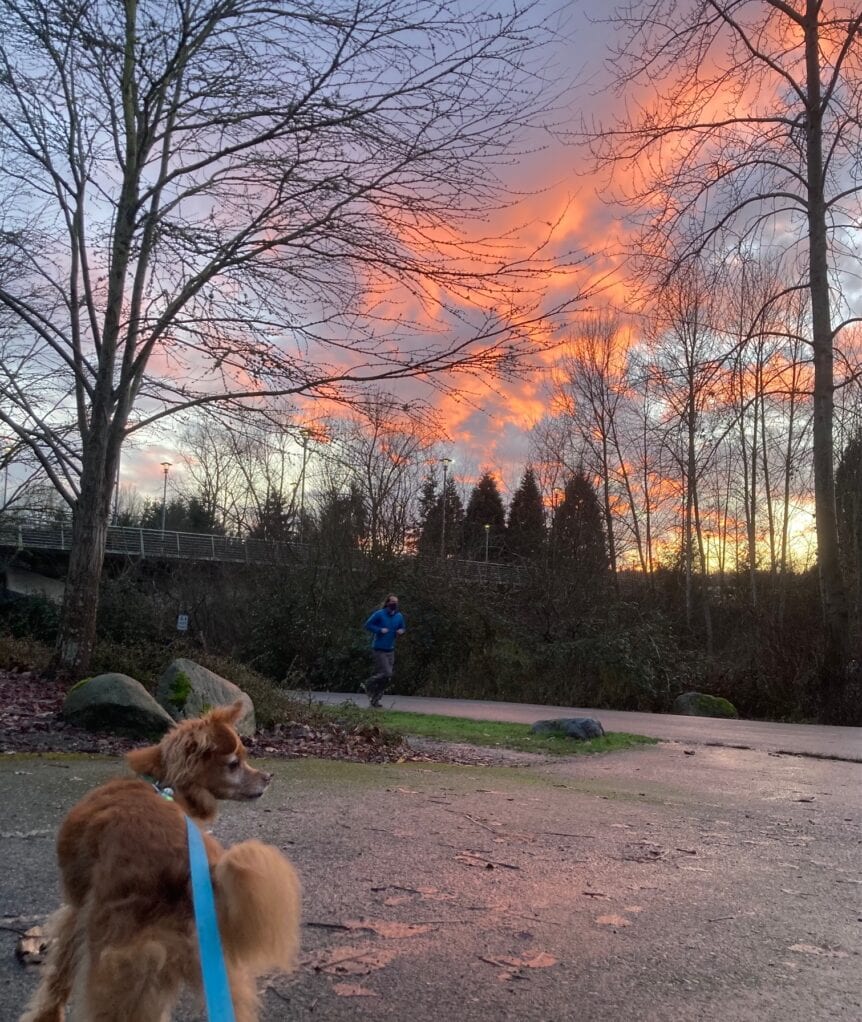 They were on the trail in front of me. Two men, walking a golden lab in the fading moments of another cold and wet and stunningly beautiful Seattle day.

His dark-haired companion paused in word but not in step. The dog kept trotting.

They turned their way and I went mine but his words kept itching at my ears. They were truth about so many of our physical pursuits.

I don’t ever feel bad after doing it.

We all struggle with getting to the beginning of whatever we do: running, lifting, biking, curling. (Does anybody curl? Tell me if you do!) Putting ourselves in motion isn’t easy, day after day, week after week, year after year. And especially when we have injuries – whether they be of the body or the soul. So many people have written to me of the struggle they felt in getting back in the gym after the death of a loved one … and yet once they made it into movement, they started to feel a tiny bit better.

And when my mom passed away, I was initiated into the club of sorrow that pins your feet to the floor and keeps you in bed long past the waking hour. Then the barbell beckoned and I begrudgingly listened and put myself in motion. It was almost a guilty pleasure but I knew it was what I needed to do. And I felt just a tiny bit better.

That’s all it takes some days, right? A tiny bit better. One easier breath after. One burden that feels a speck lighter.

It’s a tender truth that for those who think all is lost the world sometimes brings a helper we were not expecting.

Still, movement is not a miracle cure, no matter how much we would like it to be. (And don’t listen to anyone who tells you it is. In this age of Covid, wear your mask.) Running won’t cure cancer. And deadlifts – as delicious as they are – are not a substitute for medication or therapy.

Yet the magic of movement cannot be denied, especially how it can lift your spirits. Yes, it’s the dopamine but maybe something a little bit more.

Maybe in movement we find ourselves again.

All I know is that after all the miles on bikes and all the pounds lifted, I never felt bad after doing it. Not once. Every effort brought its own reward, every single time. In moving myself, I somehow lifted my soul.

Movement + sweat isn’t always the answer but it might get you closer to the answer for whatever ails you. It’s up to you to do the rest.

I’ll see you on the trail.