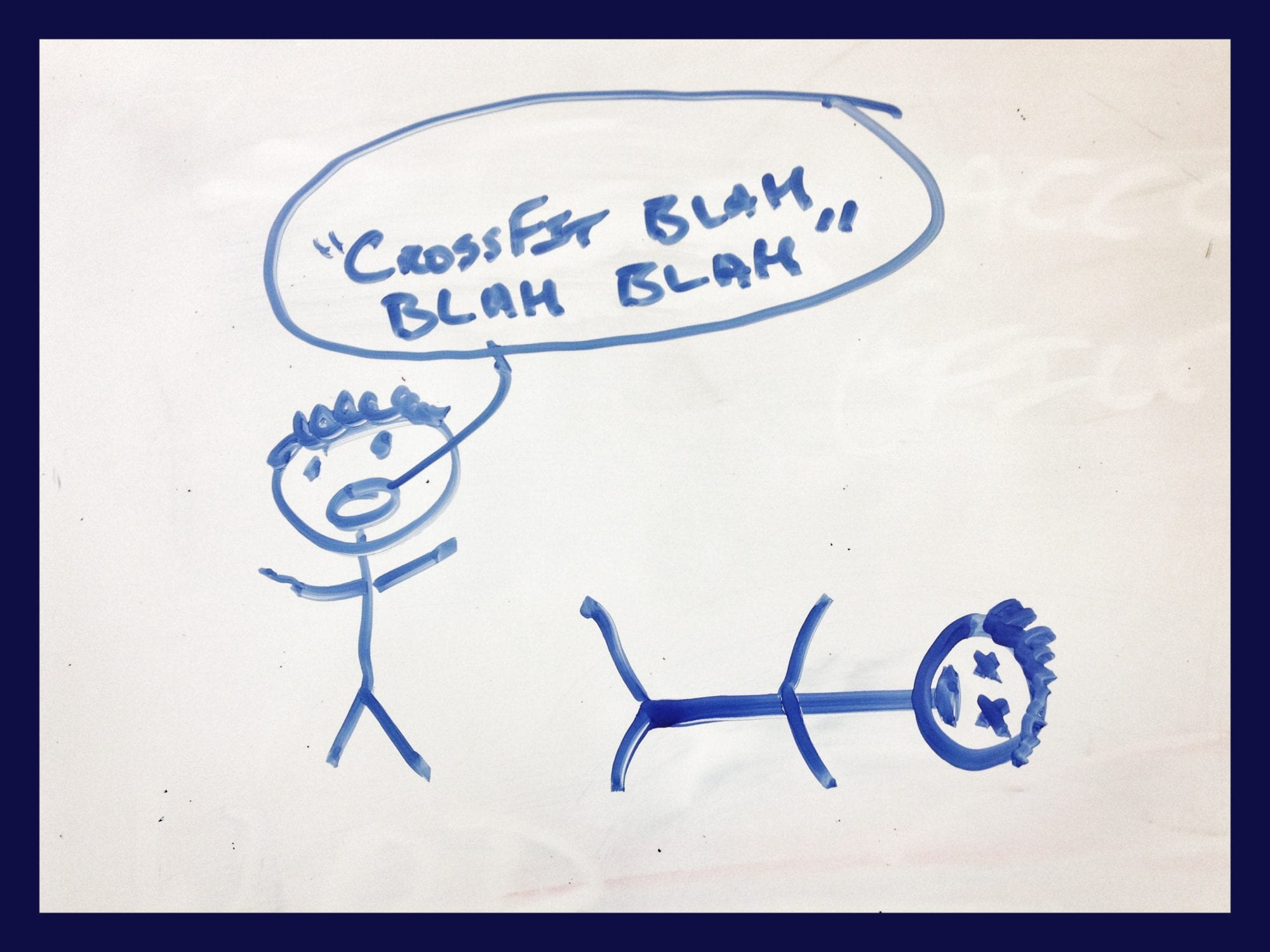 Q: How many CrossFitters does it take to change a light bulb?
A: Three. One to do it in record time. One to film it. And one to complain about proper form.

Q: Why did the blonde CrossFitter bring an iron to the WOD?
A: She heard they were going to be pressing.

Knock, knock.
Who’s there?
Wendy’s.
Wendy’s who?
Wendy’s muscles stop hurting, I’m going to kick your a** for making me do this crazy s***.

Q: Why did the CrossFit affiliate fire the new trainer?
A: He didn’t know squat.

Knock, knock.
Who’s there?
Turnip.
Turnip who?
Turnip the music, I can still hear the newbies screaming.

Q: Thruster?
A: Are you crazy? I barely know her!

Q: What did the wife say to her CrossFitting husband after sex?
A: I didn’t know we were doing that for time too.

Q: What do you get when you cross a goat and a CrossFitter?
A: An athlete who’s b-a-a-a-a-d to the bone.

Knock, knock.
Who’s there?
Subway.
Subway who?
Subway you know that I can lower my “Fran” time?

Q: Why do all CrossFit gyms have chalk?
A: You can use it to mark where the bodies fell.

Q: What’s the difference between the average bodybuilder and the average CrossFitter?
A: 4 years of college.

Knock, knock.
Who’s there?
Snow.
Snow who?
Snow anybody who wants to talk about my “Fran” time?

Q: We hear a lot about energy conservation: how is CrossFit “going green?”
A: They’re using “puke-ular” energy!

Q: What do you call a CrossFitter snatching 350 lbs?
A: Anything he damn well pleases.

Knock, knock.
Who’s there?
Art.
Art who?
Art ya going ask me about my “Fran” time?

Two CrossFit trainers are arguing over whether making love to their wives is work or pleasure.
“It’s work, “says one trainer, “You have to treat her just right, be so attentive, just to get some.”
“It’s pleasure,” says the other trainer, “This is your wife! You love her. You want to make her happy.”
They walk over to an affiliate member, who is struggling with a massive snatch.
“Hey, man, tell us,” says one of the trainers, “Making love to your wife – is it work or pleasure?”
The CrossFitter dumps the bar and stares at them. “It’s pleasure,” he says, “Definitely pleasure . . . If it was work, you two jokers would have me doing it.”

Q: What do you call a WOD that includes 4 rounds of Fran, the Filthy Fifty, Linda, Kelly, and Fight Gone Bad?
A: Death. Dude, that’s not even funny. Don’t give them any ideas.

Q: Why did the blonde CrossFitter bring a bottle of Windex to the WOD?
A: She heard they were going to be cleaning.

Q: What did one blonde say to the other during the WOD?
A: You know, I’ve been watching that box for almost an hour and it hasn’t jumped yet.

And, finally, the shortest CrossFit joke in the world: A CrossFitter walks into a bar.

« What’s That Pain in My Heel? The CrossFitter and Plantar Fasciitis CrossFit Is Dangerous, But So Is Your Toothbrush »