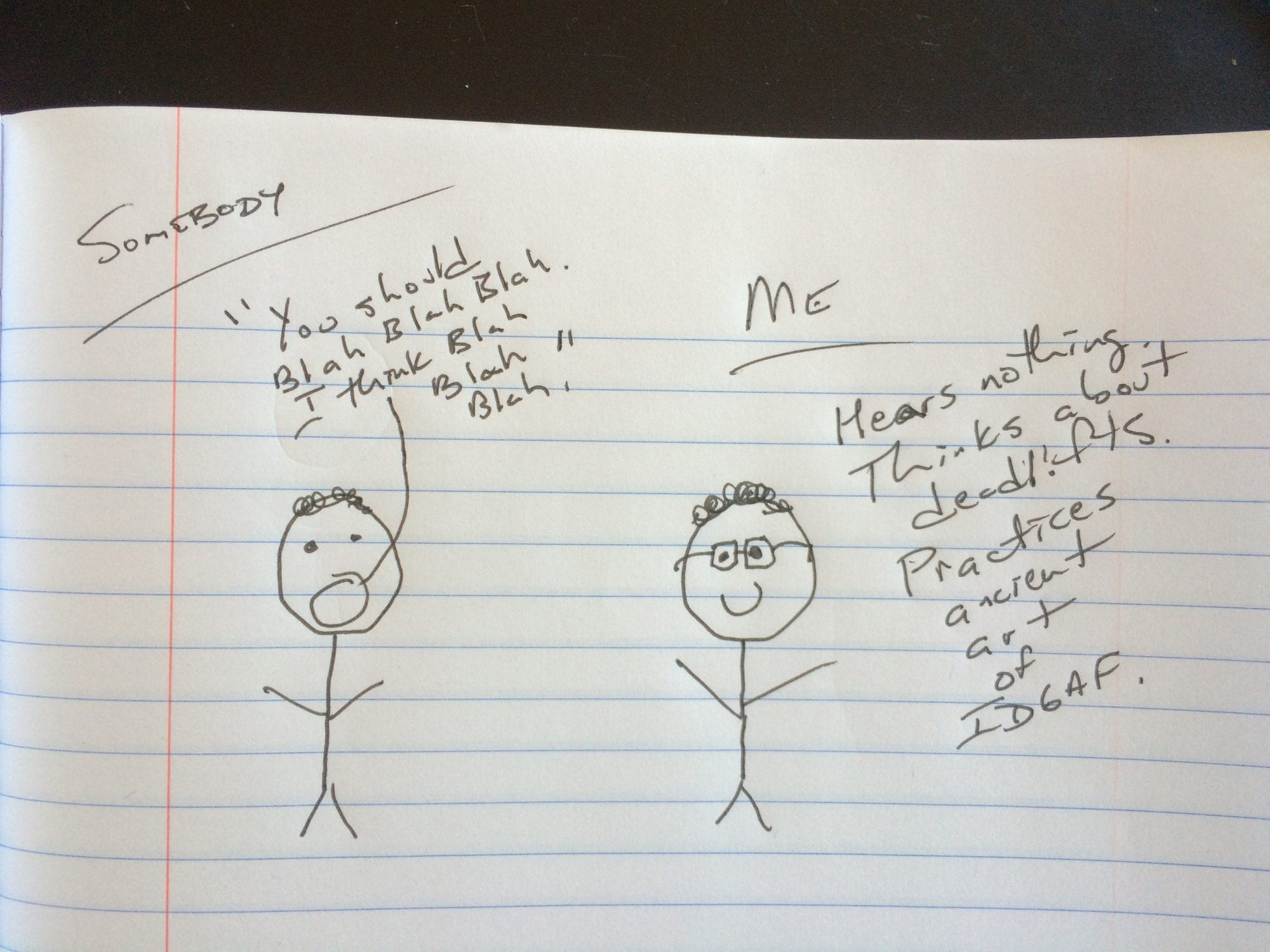 It took me a while to self-diagnose.

Maybe I thought it would go away, like a reaction to a bug bite, but the swelling never subsided and I stopped caring if it did. One day, it finally occurred to me: I simply don’t give a fuck about many things that society says I should care about.

Yes, I have IDGAF Syndrome.

Worse, IDGAF that IDGAF. And I don’t even care if you don’t GAF about me not giving AF.

This leads me to believe my case is incurable. Perhaps yours is too. Let us both hope that no one decides to open a center or host a fundraiser to combat IDGAF, because then we might have to GAF about not giving AF.

Maybe I was born with IDGAF Syndrome, or maybe I acquired it later in life. The point of origin or transmission is not critical. All anyone seems to know for sure is that I am infected.

Well, that girl doesn’t seem to want to wear serious shoes, or shirts with sleeves very often. She itches under the oppressive weight of a crew-neck. Pantyhose seem like something worn by bank robbers or Mom in the ’70s. Heels? She likes them on you if you like them, but she gave hers away and used the floor space for flip-flops.

I also noticed her collection of “Listen To Me” jackets and pants dwindled. She gave up the “I Want to See the Manager” haircut, and the kids call her current look “Anime Hero.”

She stopped caring what statement her car made, and started caring only what statements her mouth made. Sometimes, she doesn’t even talk, and just lifts the damn barbell. 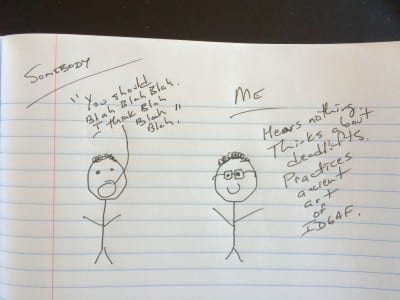 That girl laughs too loud.

She loves way too much.

And she still calls herself a girl even though she’s been a woman for many years now, but “Girl!” just has a ring to it when you say it out loud and long. “Girrrrrrl!”

She’s an enthusiastic hugger. Both arms, with a squeeze, no butt out, and maybe a little whisper in your ear. You remember her hugs, but more than that, you feel replenished somehow. Or at least she hopes you do.

She’s got a bone-crushing handshake that she won’t apologize for. Sometimes it’s hard for a girl to know her strength. Step out back with her and play catch. If you don’t use that glove pocket correctly, your hand is going to burn, but in a good way. It reminds you that you’re playing with fire. Under that big hug and even bigger smile, she is fire.

She’s bold and brassy and the kind of girl you take home to Mom if your mom likes to deadlift. Or drink whiskey. Or both. Or drinks wine and likes to laugh until the tears come. And the tears always come. We are women, after all. Our ability to emote is as wondrous as it is painful. How beautiful that we can feel life so much.

But as for that girl, even with all these words and more, I can’t really explain who she is, and perhaps I don’t want to. That need diminished with the years and the tears.

IDGAF so much that I don’t even have to say IDGAF. I just breathe.

« 10 Pro Tips for Your Pull-up Progression No, You’re Not Wrong »