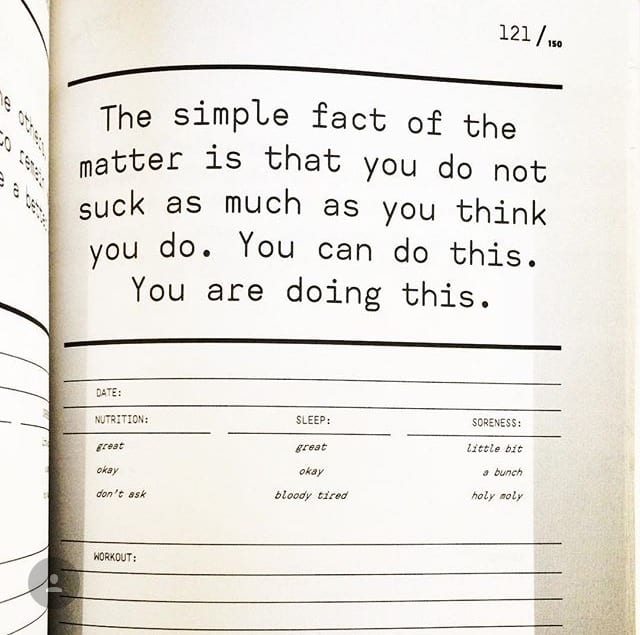 Sometimes I just want to walk through a gym and hug every person there.

One by one. Tell each of them that they’re beautiful just as they are, how they walked in. They are enough, they were enough all along, even when they woke up this morning with crud in their eyes and drool on their lips. That whatever they’re doing today, however much effort they’re putting into this workout, that it’s the right amount. And if it’s not? Tomorrow’s another day. They can try again.

I know this is crazy talk. I can’t be walking through gyms, hugging everyone. Someone will call the cops. I don’t have time to be arrested and explain. I’ve got shit to do and a whole lot of Netflix to catch up on.

That’s a lie. I hardly watch Netflix. But back to the hugging.

[Tweet “Gyms should be places of love and strength and sweat.”] That’s how I see it because that’s how my gym is. Just a bunch of people looking to get strong. Lots of barbells, no machines unless you count the rower and the devil’s tricycle.

When I look across my gym, there are growls and grins and a whole lot of intensity but no sense of “I don’t want to be here.” Everybody wants to be there, or they’re doing a damn good job of hiding it. And I’m not even counting the big bearded guy sitting on the chair near the roll-up door, eating a burrito after his lifting session. He REALLY wants to be there.

But then I go to other gyms, bigger gyms, gyms with equipment and pools and towels and mirrors.

Some of it is really nice! Who doesn’t want bright shiny clean things?

But some of it feels kind of sad, because not everyone seems to want to be there. They’re watching tv and trying to distract themselves. They don’t seem happy. And some of them seem to be there because they feel they have to be.

And maybe some people are there because they don’t love themselves as much as they could.

I get that. Loving yourself is not an easy deal. I have to work at it every day. It took me a long time to learn that accomplishments and things can’t ever fill the hole inside me, nor can a perfect face or a perfect body or perfect children or a perfect house. I have to fill that hole by myself, and I have to do it every single day.

It’s an old and simple prescription but it works.

Gyms should be places of love and lessons, practice and positivity, health and happiness. Nobody’s got time for shame. That burden is far too great and time-consuming. [Tweet “Sweat. Suffer. Smile. Repeat.”]

Leave your troubles on the gym floor and walk out free, at least for a while. And hug the crazy lady grinning through her deadlifts. She could always use another hug.

Life is never as hard as we make it.

« The Importance of Ass Kicking Focus On What You CAN Do »